A few weeks back, I did a small study project on the yellow gown from the upcoming live-action Beauty and the Beast (and now you can also find the blue provincial ensembles, and Gaston’s wardrobe, as well as my post-seeing-the-movie costume thoughts).  But as happens, things come up and information can be hard to find when all the focus is on one gown.  So this study will have suppositions based on what I know about the fabric types that tend to be used as well as what various fibers look like. 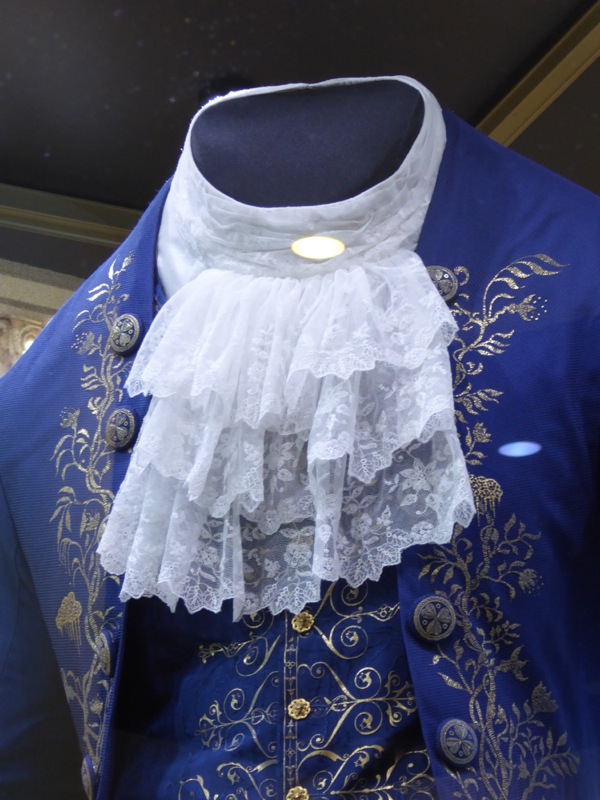 Let’s start with the easiest piece.  Beast’s tie is actually a cravat.  Cravats were invented just over a century before our story is supposed to take place.  This style of neckpiece was first worn in Croatia, and its name, as we know is, is based on a French mispronunciation of “Croate.”  This piece did become extremely popular in France in the mid-18th century in grand ballrooms and at royal courts.  The flowing style we see here was an evolution if earlier loosely-tied versions, and was first noted in the 1770’s, which is the general time-frame of this story.  Someone did their homework, or got lucky.

This cravat is made of embroidered net lace, and it appears to have the body of cotton netting.  Silk, unless starched, is a bit softer, as is rayon.  I just checked this using some wide embroidered nettings I have in my personal stash room.

The same lace is used at the sleeve cuffs.

The above photo also clearly shows a few other notable details.  The buttons on the frock coat (which I shall just call the coat) are embroidered, and the fabric used is a plain weave.  Very likely the coat is wool, though it looks a lot like cotton.  I can say for certain that it’s not a synthetic, such as polyester.  The decoration on the coast is also embroidery.*  Both of these details are also visible in the next photo.  Another detail, which is easy to miss unless you look for it, is the seam on the front of the sleeve.  I will address that in a short while.

(*Whether the coat is actually embroidered, or is really, really well-painted complete with irregular “stitch” lines is up for debate, but if they did paint this, then it begs the question of why the yellow gown’s detailing wasn’t painted to look like embroidery.)

I can not tell for certain, but the decoration on the waistcoat (aka “vest”) appears to be a painted decal.  It’s a bit too smooth to look like embroidery, and we know from the yellow gown that they aren’t above painting these ensembles.  There is a texture to the waistcoat, but it’s not as soft of a fabric as a silk damask, and does remind me of a silk-rayon blend due to the body of it.

The gold buttons on the waistcoat can be either plastic or metal.  I’ve seen La Mode buttons that look similar in plastic, though either is a real possibility.  These same buttons are also on the lower part of the breeches. 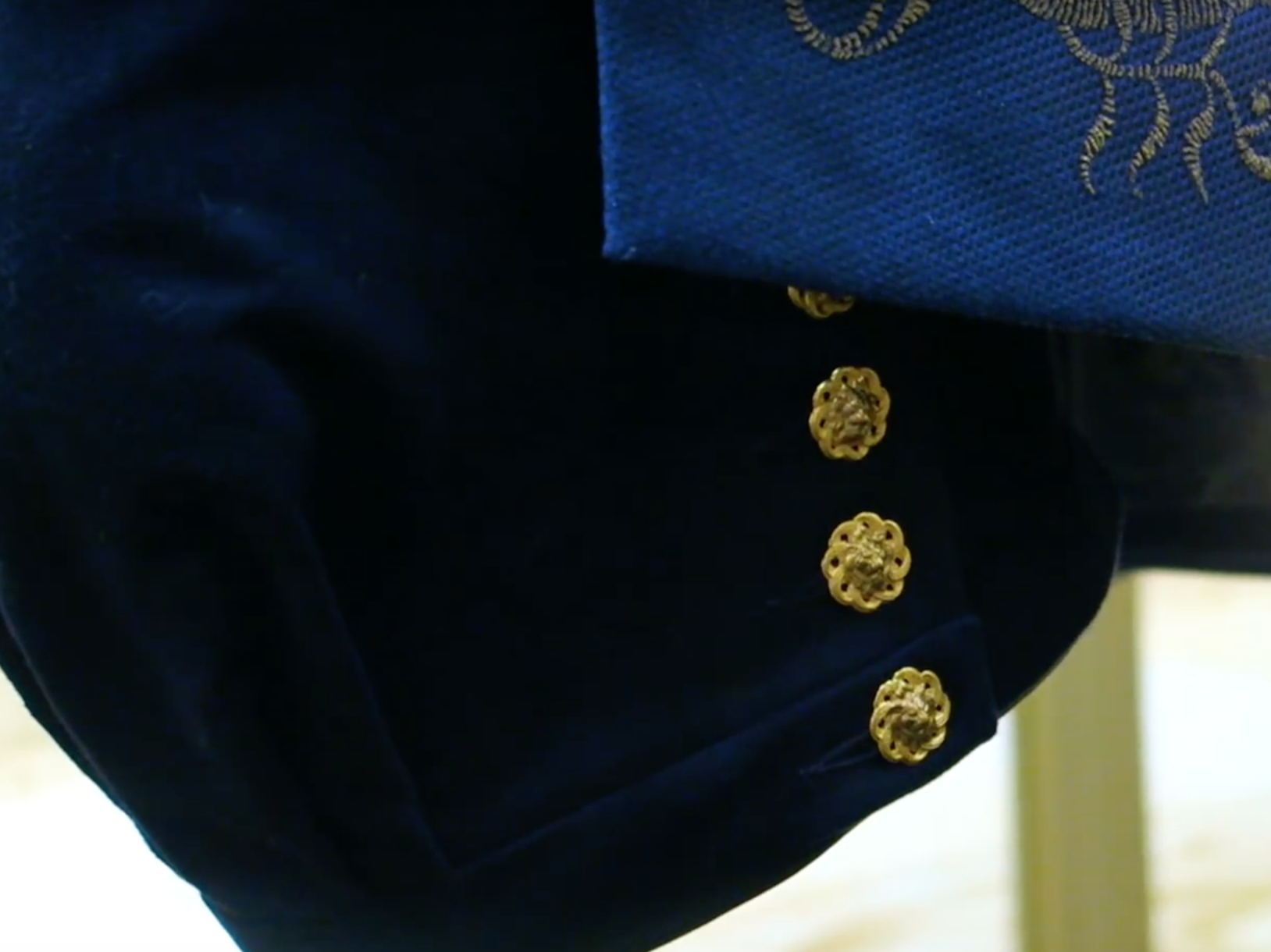 An interesting note, to someone like myself to is am embroidery-enthusiast, is that the embroidery’s lack of a connecting top thread between the stitches gives the appearance of hand-embroidery.  I can’t help wondering if perhaps it is.  That would be amazing.  Also this photo looks more like cotton than wool.  When I recreate this coat, I may use cotton.

A fun little detail, visible in the next photo, is that the coat is lined with a blue and cream jacquard.  That is the kind of detail I get twitterpated to find.

The breeches hold onto very small fibers in the same walk velveteen does.  That fabric is definitely too stiff for silk velvet, but has the body of a low-pile cotton velveteen.  It is a few shade darker than the rest of the ensemble.

As for the overall cut of this coat, waist coast, and breeches: 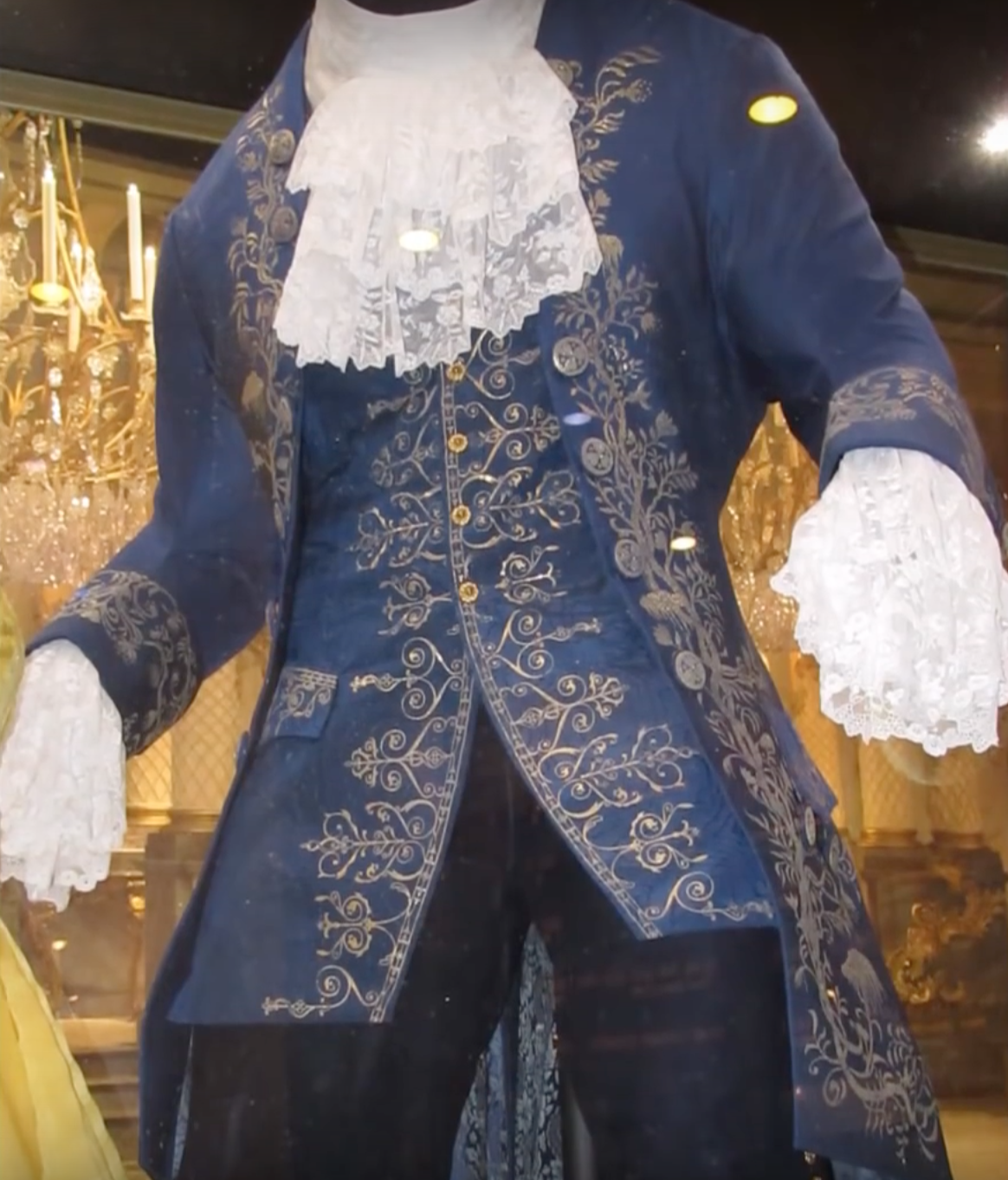 It is extraordinarily accurate to the era. Take a look at this extract ensemble (to the left) circa 1760 from the Victoria & Albert museum in London.  The bottom of the waistcoat, the cravat, the two-piece sleeves…

Ah, yes, that seam I mentioned.  As you may be able to observe, the sleeves on both the extant coat as well as the  film coast curve forward.  This shaping is achieved by cutting each sleeve in two pieces.

The breeches are also cut just below the knee, and are quite snug.   It would be severe more decades before men’s breeches hit the ankle, where they have stayed ever since. 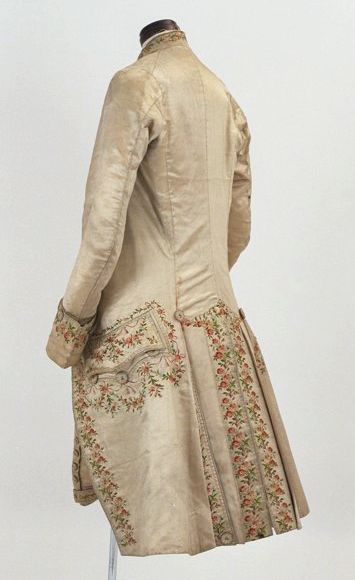 Just…look at that.  Excuse me while I take a moment to admire the detail, the seams, the craftsmanship, to appreciate the time that took…

All right.  Back to the matter at hand.  Did they, or didn’t they? 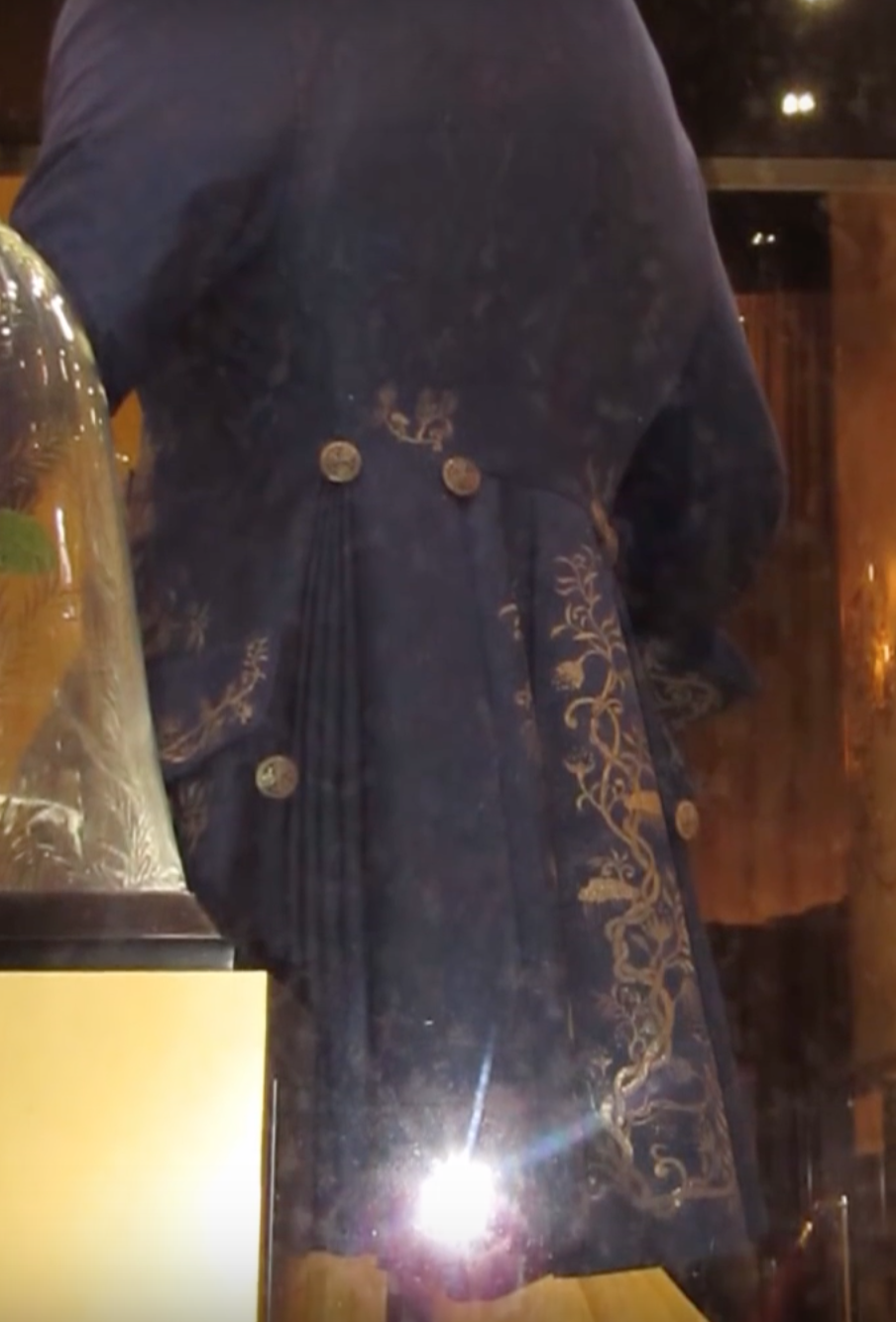 Yes!  Though this is my best photo of the back so far, and it’s not great, this coat is NAILED!  The wonderful pleases, that stunning gold embroidery, the proper seaming…  After the historical let-down of the gold gown (again, beautiful in its own right, but too incredibly far from the era in every singe way to remove me at all from the 21st century, and the overall style also failed to be cohesive to the rest of the costuming aesthetic), this ensemble makes me so, so happy.  Just look: 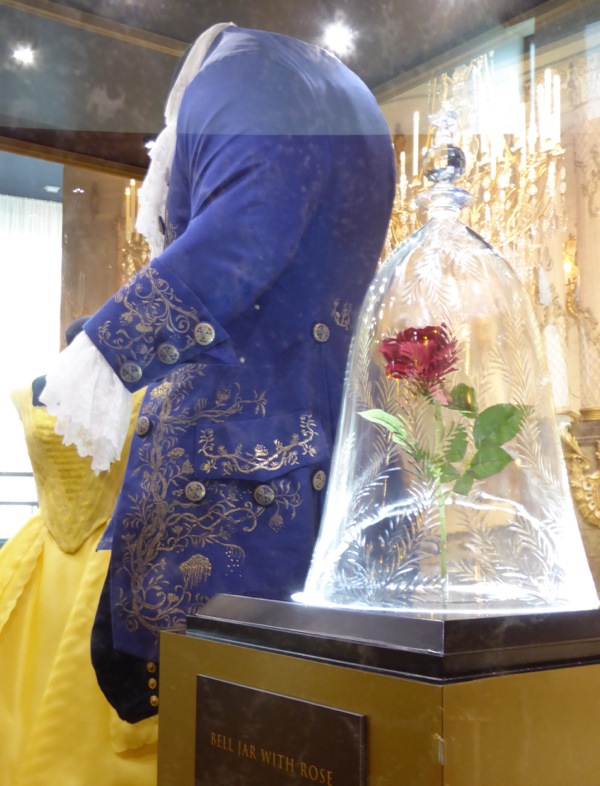 Okay, past the bell jar.  Look at this (and see the damask fabric better, which looks aallllllmost like a moire). 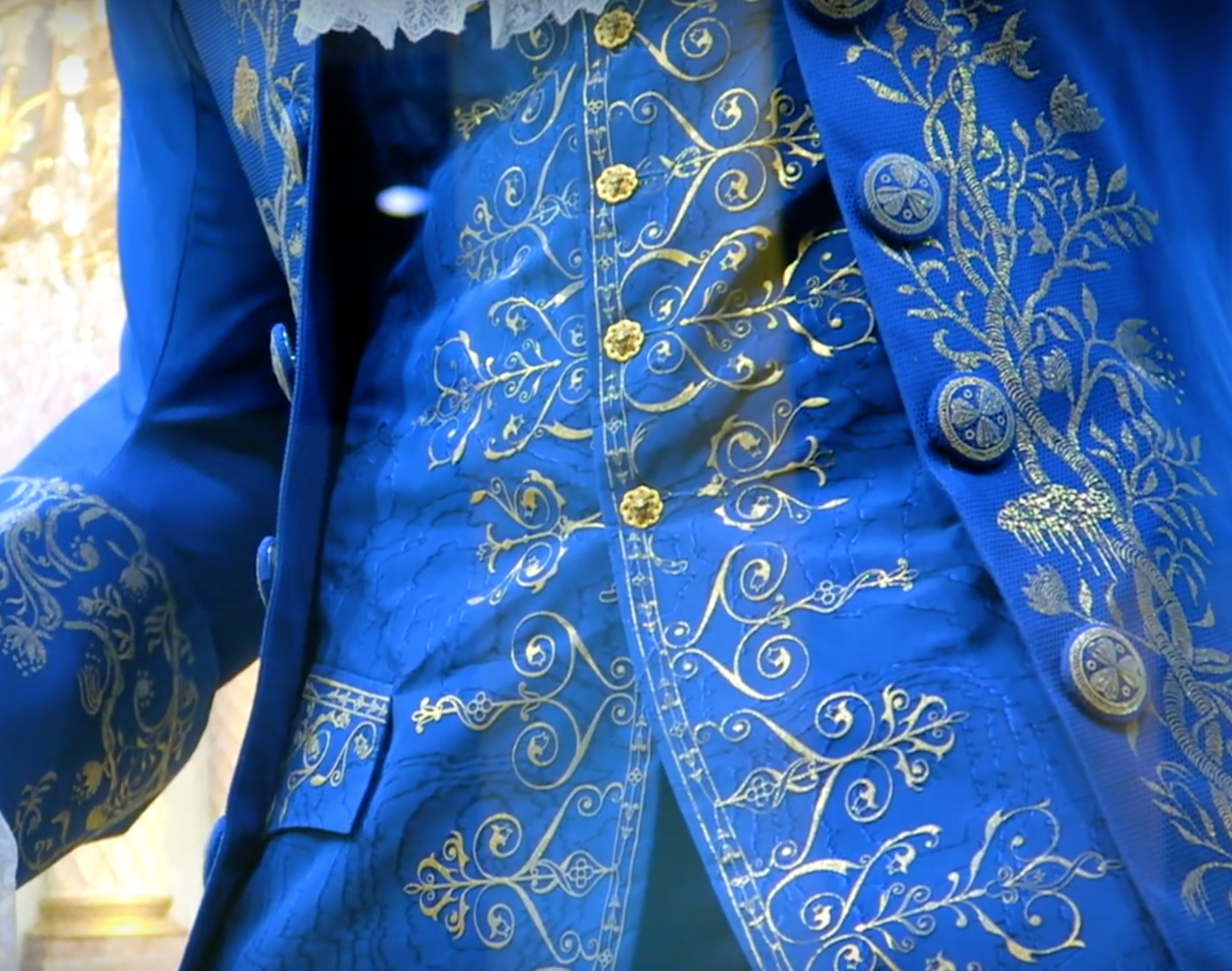 It’s just beautiful.  I’m glad they hit this one out of the park.

Next costume study: The Provincial dress.  That one, which does have some big historical liberties, still invokes the era, and has some small details I love.  Stay tuned for that one in the next few days.

A forerunner in high-end couture and film and stage reproductions since 1999.